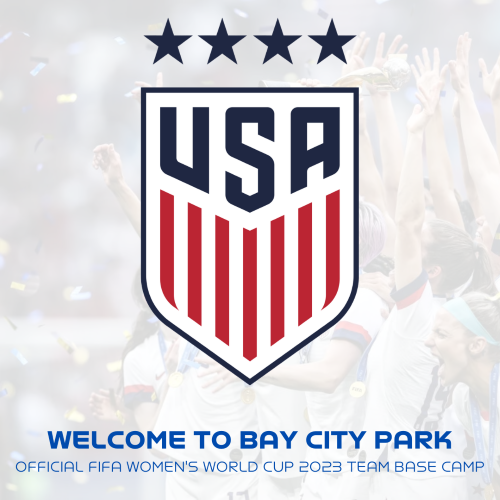 East Coast Bays AFC President Roger Bridge says it is an exciting time for women’s football in New Zealand and the club is thrilled to be hosting the current number one team for the upcoming global football event.

“Our club is focused on growing girls football and with our homeground being a home away from home for the American team, I have no doubt this will inject further excitement into the game and inspire more girls to give football a go.”

With a daughter playing football, Bridge says girls football in New Zealand often competes with other sports like netball, so East Coast Bays AFC introduced Friday evening games to encourage girls to give football a go without giving up their Saturday sport and it has proven to be successful.

“We’ve a fantastic club community and a membership that is made up of players of all ages and levels, as well as an active team of volunteers and professional coaches. I’m sure our club will enjoy supporting the talented USA team; as a close second to our own NZ Football Ferns of course,” said Bridge.

NRF CEO Laura Menzies said the announcement makes the tournament very real. “Now we can really picture the world’s best teams training and enjoying the facilities at clubs throughout our region. This brings the tournament into our backyards, with international teams using the same clubs and facilities we enjoy.”

“Many of the clubs involved have already benefited from upgraded facilities, with more to come, part of a long-lasting legacy for this tournament. Thanks go to our clubs, Auckland Unlimited, NZ Football and FIFA for making this happen,” said Menzies.

For East Coast Bays AFC to be a host venue, there is a requirement for facilities to meet FIFA standards and this will include modernising ageing facilities and meeting gender neutral objectives. Funding from FIFA, NZ Football, Auckland Council, Lotteries Commission and other grants and funds will be invested in the club to bring facilities up to FIFA standard, including upgrades to the lower fields, lighting and club facilities. The upgrades include:

Training Venue Manager – Auckland Unlimited Neil Coventry says it is incredibly exciting so many clubs will be able to connect with visiting teams. “I want to thank everyone for their engagement and hard work in getting to this point,” he said.

Other New Zealand training bases will be in Dunedin, Hamilton, Palmerston North and Tauranga, with Christchurch and Wellington hosting two bases each.

See the full tournament schedule and secure your tickets for the tournament, which starts with the Ford Football Ferns v Norway on 20 July at Eden Park