MATCH REPORT: Round 8 vs Metro FC 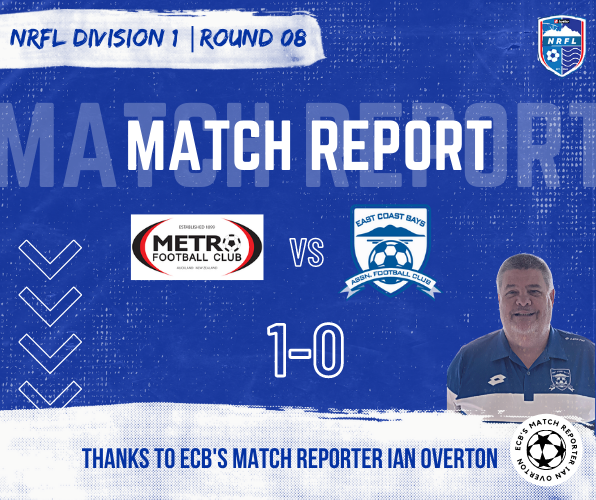 Match day Eight saw EC Bays travel across the bridge to Mt Albert to take on Metro at Phyllis Street Reserve after having a postponement the weekend before.  The week off saw Judd return from his injury and Daewook was on the bench after his injury down in Tauranga.

Under lights, Metro kicked off and after 5 minutes had Bays under pressure. Mikey K cleared a cross for a Metro corner which skimmed off heads at the back post & out of play. A minute later a long ball down the right just failed to reach Liam and a minute later a long-range shot went straight to the Metro keeper. After 13 minutes an excellent ball down the left by Codey found Keegan but he was dispossessed. A minute later a break down Bays left by Memedovic lead to a cross that was shot wide by Shin. Then Liam burst into the Metro box and his lay off to Judd lead to a shot that was blocked. The resulting corner was headed on & then headed wide. Five minutes later Liam latched on to a ball down the right, but his shot was straight at the Metro keeper. Judd then had another shot deflected out for another corner. From that corner Zane had another shot deflected out. The next corner was headed wide by Judd. Four minutes later a cross from Liam from the right was hit into the side netting by Codey.

One of the crucial moments in the game came in the 30th minute when an excellent move by Bays saw a dummy and the ball was through to Keegan. He was clean through on goal, but Marshall blocked the shot & it went out for yet another corner. Two minutes later some nice foot work saw Zane dummy his way past three defenders and yet another shot was blocked/deflected out for a corner. From the corner clearance Metro went on the fast break and a neat ball was played straight down the middle for Englefield to run inside James and shoot into the far corner past the onrushing Louie with the help of the extremely hard, bouncy pitch. Metro lead 1-0 completely against the run of play. Five minutes before half time Rajabi had a free header from a corner but it went straight to Louie. Bays then had back-to-back corners that were both cleared away from danger. A minute later Metro had another fast counter. Keegan clearly got the ball but was incorrectly shown a yellow card for a tackle from behind. And just before half time Judd was shown a yellow card for a foul after showing some frustration at the inconsistent refereeing.

Half time score was 1-0 to Metro. A lot of chances for Bays but none were taken in a very frustrating first half for both players & supporters. Metro kicked off the second half as the evening got a bit cooler. Another run down the right & cross by Liam lead to a scuffed shot from Keegan. Liam then had another cross cleared at the back post. An excellent piece of play by Bailey saw him win the ball, cut inside the defence and his pass led to a shot straight at the keeper. A Callum corner to the back post was met by a header by Liam straight at the keeper. Metro made their first change in the 61st minute when Dorner replaced Shin. Three minutes later Bays made their first change with Nicolai replacing Keegan.

A minute later a cross from the left by Codey was mis controlled by Judd. Metro then played a long ball down the left and a shot came in from Han that went wide. After 69 minutes Bays made two more changes with Daewook replacing Zane and Macca replacing Judd. Metro then had another break down the right and a shot by Englefield went straight to Louie. Metro then made a second change with Soffie coming on for Turner. Callum then chipped a ball over the top of the defence for Nicolai, but the ball was not controlled well & was cleared. Five minutes later Gillespie hit a long-range rocket that just went wide of the post. Liam then broke through the defence, but his shot went wide of the right-hand post.

Bays then had a lucky escape when Englefield got away from his marker and his shot was expertly tipped around the post by Louie. The resulting corner was headed over by Han. Daewook then played a ball down the left to Nicolai who’s cross was headed wide by Liam. Two minutes later Bays were lucky not to be two down as they Metro made another break down the right. The first shot by Dormer was saved and the rebound was blocked brilliantly by Louie from Englefield. Great double saves by the Bays #1. Metro then started the time-wasting tactics and Heath was booked for kicking the ball away. A minute before full time Liam made another burst into the penalty box & was brought down. But no penalty was awarded and shortly after the final whistle went with Metro winning 1-0.

Another narrow loss but if the half chances went in it could have been a lot different story results wise. Liam was named Bays player of the day for his nonstop running all evening. Next up it’s a home Chatham Cup game at home against Te Atatu.