MATCH REPORT: Round 5 vs Albany Utd 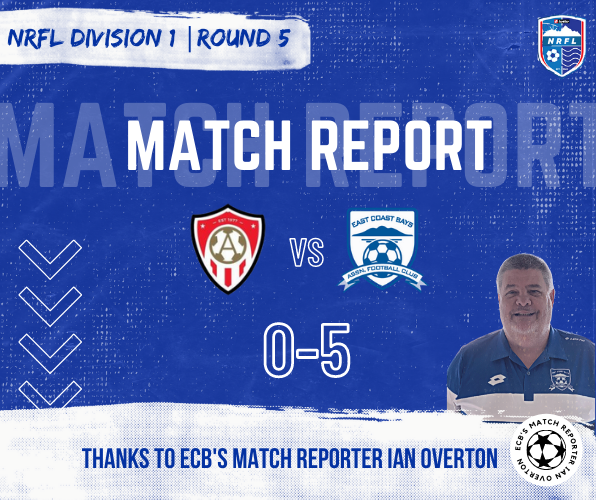 Match day Five saw a clash between Bays and local rivals Albany at Rosedale Park on a blustery, grey day, on Easter Monday. Bays were almost at full strength again with the return to the starting lineup of Daewook Kim after injury and Oscar starting in place of Codey, who was on the bench. Some familiar faces were playing for Albany in former Bays players Sam Jasper, Tom Davis, Benji Roberts & Jack Beguely.

Bays decided to play into the very strong wind in the first half and kept the ball on the ground for most of that half. After only three minutes a foul on Judd by Chamberlain-Barlow lead to a free kick by Nicolai that was shot straight down the middle to the keeper. A minute later a stray pas by Daewook was intercepted by Windust who played in Beguely, but Bailey made a great block. After 6 minutes a break down the left by Chamberlain-Barlow resulted in a shot saved at the near post by Louie. The corner reached the back post with Beguely miss hitting his shot.

After 12 minutes Zane had a left footed shot go wide, after 15 minutes a cross from the left by Nicolai was cleared, and after 16 minutes a pass from Mikey K to Liam lead to another cross that was cleared for a corner. After 19 minutes another Liam cross from the right lead to a free header for Judd but he put it wide. A pass by Judd to Oscar lead to Oscar being fouled but no free kick given, Nicolai went on a burst down the right and skipped over a trip by Tom Davis before passing to Judd, who was crowded out from shooting. Liam then set up Judd for a clear-cut opening, but the shot went wide.

While Bays kept the ball on the ground Albany resorted to long balls that were either too far ahead of their attackers or easy pickings for Louie because of the very strong breeze. Benji Roberts had a shot saved and then a free kicked sailed well over the wall. Judd had a glorious chance to open the scoring  in the 34th minute after being fed by Oscar but his drive went wide. A cross from Declan found Nicolai at the back post but his shot also went wide. Two minutes later a cross by Davis found Beguely but his left foot shot was deflected out by Bailey. From the resulting corner Bays had a lucky escape as the ball played in was headed over Louie by Windust but luckily Oscar was at the back post to clear off the line. Five minutes later Zane was booked for a late tackle after a running physical battle with the Albany midfielders. Two minutes before the break good link up play between Daewook to Judd & on to Nicolai lead to another left foot shot wide. Just before half time an Albany free kick by Chamberlain-Barlow was driven across the box and deflected out for a corner by Daewook.

The half time whistle blew with the score line reading Albany 0 EC Bays 0 but not for the lack of chances both teams had in that first half. Interestingly, Albany changed their set up for the second half playing into the stiff breeze and this suited Bays down to the earth with Nicolai & Liam raising hell down the wings. After only 5 minutes Nicolai had a left foot shot saved. A minute later Nicolai played a ball into the penalty box, Judd turned Tom Davis and was brought down for a penalty kick. Albany keeper Kavanagh left his line early to save Judd’s first attempt and was shown a yellow card. Judd made no mistake with the second attempt to the keepers left for a 1-0 lead to Bays.

Five minutes later Judd had another shot saved and two minutes later a long range shot from Zane was heading for the top corner but was brilliantly saved by Kavanagh. Albany made a couple of changes in the 60th minute with Bashir & Anthony Hagan replacing Jasper & Chamberlain-Barlow. A minute later a long ball went right down the middle to Judd who shot past the keeper, but it hit the far post & went out. A throw in by Oscar lead to another Judd shot wide and then a corner was headed just wide. Bays increased the lead in the 65th minute when Zane played a perfect through ball to Judd who beat the offside trap and finished expertly under the keeper. Albany 0 EC Bays 2.

Two minutes later another long ball down the middle was picked up by Liam and his shot beat the keeper but not the post. After 68 minutes Bays made their first change with Keegan replacing Zane. Two minutes later Judd completed his hattrick by finishing off another long ball down the middle and firing past the keeper for Albany 0 EC Bays 3. Two minutes later Liam intercepted a cross field pass and hit a sweet left foot shot into the bottom left corner for Albany 0 EC Bays 4. Albany well shell shocked at this point and made a second change with Bartlett replacing Roberts in the 74th minute.

Only a minute later and Declan made a break down the right and his cross was collected by Kavanagh with Judd lurking at the back post wanting more goals. Bays made two more changes after 76 minutes with The Macca Attacker & Codey coming on for Liam & Judd. Five minutes later Albany made two changes of their own with Simkin & T Mosquera replacing T Nkoy & J Allen. Albany then had a free kick cleared by Oscar. Bays made their final change in the 81st minute with Ryan Singh replacing Declan. In quick succession Nicolai had two shots blocked & saved. Albany had a rare second half shot by Simkin saved by Louie.

With 5 minutes to go another long ball down the left by Codey found Nicolai whose shot was blocked out by Davis for a corner. The corner was played to the back post and Keegan’s header was straight at the keeper. With two minutes remaining Callum played a superb through ball down through the middle of the Albany defence to Keegan who placed his shot past the Albany keeper to make the score Albany 0 EC Bays 5. Shortly after the referee blew the full-time whistle just as the rain started coming down.

A magnificent second half display playing the ball along the ground with the wind to   Bays speedy attackers proved dividends big time. Final score was Albany Utd 0 EC Bays 5 in a fine display both into the wind in the first half and with the aid of the wind in the second half. Judd was named Man of the Match for his treble of well taken goals, but Zane must have also been close for his battling (and sometimes bruising) 68-minute display. So, six points from the Easter weekend to move Bays up to fifth in the table and we now look forward to a trip to Tauranga next weekend.