MATCH REPORT: Round 18 vs Manurewa 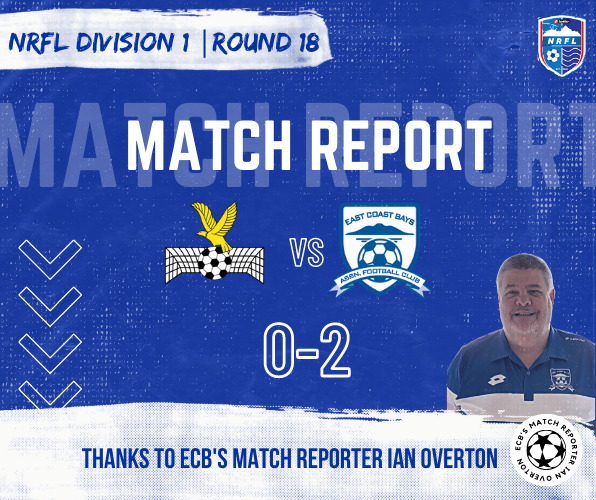 Bays travelled over to South Auckland for a match against high flying Manurewa with it being 2nd vs 4th in the table. A couple of changes to the starting lineup saw the more experienced Declan & Daewook start with Dan & James moving to the bench in what was likely to be a very physical battle. Bays started off well and after 3 minutes a free kick on the right found Nicolai, who found Keegan, and his shot was blocked by a defender. A minute later Nick received a very early yellow card for tripping a Manurewa player who was on the run. Four minutes later a Callum corner found Daewook free in the middle but he headed over. Two minutes later an excellent ball was played across the penalty area but just out of reach of a couple of Bays attackers.

A minute later Bays were almost caught out when a ball straight down the middle found Bobadilla. He looked slightly offside but play was allowed to continue. Louie came out and Bobadilla chipped him. Luckily the chip cleared the crossbar & justice was served. Six minutes later a ball down the right found Shah and his cross to the centre was comfortably cleared. Bays took the lead in the 20th minute when Liam made a great run down the right, beat the last defender and his perfect cross was headed home at the back post by Sam. No more than Bays deserved to be 1-0 up. Two minutes later Sam broke into the box on the left side but his cross to the centre evaded everyone & was cleared away to safety.

Great team passing between Declan, Nick & Sam saw a fast break forward but the last ball went just a bit too far forward. In the 28th minute a Manurewa clearance found Daewook just the other side of half way. He hit a speculative spot goalwards and with the Manurewa keeper looking into the sun he was almost embarrassed as he misjudged the bounce of the ball. The ball bounced over the keeper but luckily for him it only just cleared the goal as well. Four minutes later Manurewa broke down the left with Bobadilla, who cut inside & teed up Perez who shot way over. Nick then played in Keegan but he was shouldered off the ball as he was about to pull the trigger.

Manurewa upped the ante to try and level the game. Firstly, a shot by Filho hit his own player Horgan and ran through to Louie. Then a ball down the right to Shah made its way into the centre and Lai-Sai hit a perfect volley on the run. Only problem was that it went straight to Louie to catch comfortably. Bays had weathered a mini storm and against the run of play they doubled their lead in the 40th minute. A Bays free kick by Callum on the right reached the back post and Sam headed back across the goal. Keegan was at the far post to hook the ball home for his 10th goal of the season and Bays were now leading 2-0.

Manurewa’s response was immediate with Shah making yet another break down the right and his cross to the back post was eventually cleared by Liam at the 2nd attempt. Just before half time Shah made another run down the right. He cut inside Mikey K and let fly with a left foot rocket that was heading for the top right corner. Louie dived full stretch and managed to fingertip the ball on to the crossbar for an amazing save. All of us thought the shot was going in for sure but it was probably the best save I have seen all season and kept Bays two goal lead intact. Shortly after, the half time whistle went & Bays were leading 2-0 thanks to taking two half chances & some very brave defending.

Manurewa made a change at half time with Hunt coming on for Sami at the back. Within a minute of the restart Horgan had a left foot shot over and then a Shah cross was headed away by Logan. Ten minutes into the second half Perez was booked for tackle from behind on Nick. That was the last piece of action for Nick as he was replaced by Dan Morgan. Daewook then went into the refs’ notebook for a foul on Lai-Sai. Callum then made a break down the left which led to a shot by Dan that was saved by the keeper. Five minutes later a fast break was on with Keegan & Nicolai but Keegan was just offside when the final pass was put through. Dan then had another shot blocked for a corner and from that Daewook put another header over the goal.

Liam then won a good duel, passed down the flank to Nicolai, and his cross was just missed at the far post by a flying Sam. Perez then dribbled past a couple of Bays defenders but ended up shooting wide. After 75 minutes Bays made a couple of changes bringing on more experience with Julyan & The Macca Attacker replacing Daewook & Declan. A Bays free kick was deflected out for a corner and from that Liam headed narrowly wide. Manurewa played another ball straight down the middle for Horgan to run on to. He played the ball past Louie as he came out & that slowed the ball down. Horgan was eventually pulled back for offside. Nicolai then made a break down the right, beat Hunt all ends up and his cross saw Sam have his shot blocked at the far post. After 80 minutes Manurewa replaced Estay with Peters and three minutes later made another change with Jeftha replacing Lai-Sai. Bays then had one shot saved low down by the keeper and Nicolai drove one over the goal. In the 89th minute good interplay by Manurewa led to Horgan scuffing his shot straight to Louie. Louie then made a save from Bobadilla low down from a rasping drive.

In the 94th minute James came on for Nicolai who had run himself into the ground (not literally !!). There was still time for a Manurewa corner that ended bobbling around in the box before being cleared for another corner. A minute later Jeftha made a break down the left, cut inside and let fly with a right footed curler. Louie made his second brilliant save of the match to palm away the fierce shot. Then in the last minute Bays had a quick counter attack that led to a cross from Macca right across the face of the Manurewa goal that was deflected out for a corner. Bays played keep ball from that and the final whistle went.

Final score was Manurewa 0 East Coast Bays 2. Bays did very well to get such an important result. Good finishing and some fine defending kept the winning run going with wins against the teams that were 3rd & 2nd in the recent weeks. And the Bays # 1 has been in brilliant form lately. Bays moved up to 3rd in the table and are now only 4 points behind 2nd placed Manurewa, who we have to play again later in August. Next week it’s a trip over to Pakuranga to see Bays take on Fencibles and hopefully the winning momentum keeps going as Bays chase a possible promotion spot.