MATCH REPORT: Round 17 vs Tauranga City 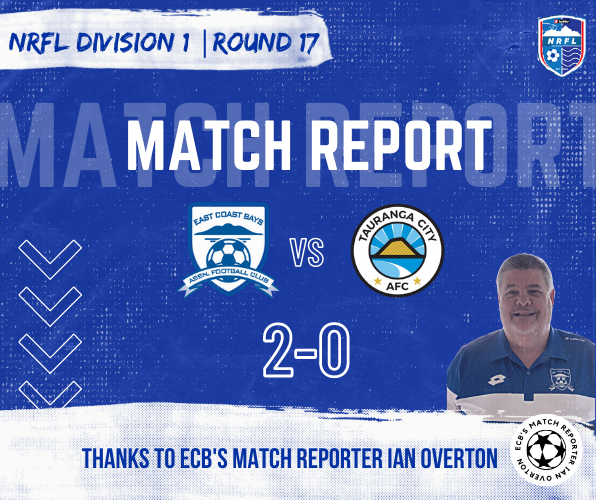 It was a battle of 4th against 3rd at Bay City Park as Bays took on high flying Tauranga City. One change to the starting lineup saw James come into the back line and the young players kept their starting places.

Tauranga started off like a house on fire. After only two minutes Bidois had a shot blocked in a goalmouth scramble. At the other end Nicolai got in behind the defence but his cross ended up behind Keegan and was cleared. Two minutes later a left foot shot from Molloy was palmed away by Louie. A bit of superb skill saw Nicolai away again but his long ball to the far side just failed to reach Dan. Then a cross by Fisher was headed over by Reid. At the other end a cross from Liam found Callum who’s volley was well saved. A dangerous cross into the Bays area was headed over his own goal by Mikey K. Tauranga made an early sub in the 13th minute with Maddox replacing an injured Grieve.

After 16 minutes a Bays corner led to a Nicolai cross before his low shot hit the bottom of the right post & rolled into the keepers’ arms. Bays had weathered the early onslaught and seemed to then step it up. Keegan played an excellent through ball to Sam, who saw his left foot shot blocked for a corner. Bays were nearly caught out in the 22nd minute when a long ball played into the box found Fisher & his shot was saved by Louie’s outstretched legs.

An excellent ball forward by Nick found Liam who strode forward but his shot was just wide of the goal. A poor clearance by Sam fell to Reid who hit an excellent right foot curler just over Louie’s goal. Bays took the lead in the 28th minute when Nicolai was fouled and then straight afterwards Dan was fouled just outside the box. Callum stepped up and his right foot shot took a slight deflection off the outside of the wall before nestling in the top right hand corner. Bays had ridden their luck a bit and were lucky Tauranga had not been clinical in front of goal. But in some ways they deserved to be 1-0 up.

The second goal followed two minutes later and it was a fine team goal. Keegan played the ball down the outside right channel to Nicolai. Keegan carried on his run and received the return ball as he reached the right edge of the box. He looked up & crossed to the back post. Dan received the ball, dummied and then shot home into the bottom corner for his debut 1st team goal. All of a sudden Bays had a two goal cushion. Nicolai then made a break into the box and was brought down. But no penalty was awarded. Tauranga then made a break down the left, a cross came in, and Fisher had his shot blocked before the ball was gratefully collected by Louie. Tauranga then had a corner that Louie cleared with some difficulty after being fouled in the process. Maddox then had a fierce drive that Louie beat away before the ball was cleared away from danger by James. Just on half time a cross by Sam found Nicolai but he headed wide.

The half time whistle went and Bays were leading 2-0. An action packed first half and not much different to how the Chatham Cup was played between these teams earlier this season. Tauranga made a change at half time with Brinkmann coming on for Brown. Brinkmann made an immediate difference to Tauranga. First, he played a through ball to Fisher who shot wide and then another through ball to Molloy, who also shot wide. Higgins was finally booked for pulling back Nicolai after many fouls on the Bays winger in the first half. Davidson was then clean through on goal and Louie made an excellent point blank save.

Nicolai was then brought down by Molloy, who was also booked. Nicolai took the free kick and got the ball over the wall but straight into the keepers’ arms. Tauranga then had a free kick and an excellent delivery saw a bullet header by Higgins pushed away by Louie for another brilliant save. Bays responded by bringing on a lot of experience with Julyan, Daewook & Declan replacing James, Nick & Dan. Four minutes later a Tauranga throw in was intercepted by Nicolai who sent Liam on his way down the right. His excellent cross went right across the box.

Callum’s free kick into the middle found Daewook who’s header was deflected out for a corner. The corner was played into the middle but a foul was called & Tauranga got to clear the danger. Fisher was then yellow carded for a foul on Keegan. Callum’s next free kick found Daewook again but his header was just over the goal. Bays then had another fast break. Keegan broke up field, dummied the defender (who fell over comedy style) and his shot went well over. Tauranga kept going to the end and Brinkmann was through but shot well over. Shortly after, the final whistle and Bays had claimed an impressive 2-0 win. Two quick goals settled this match and Bays did well to defend well for long periods of the game. Congrats to Dan Morgan for his debut first team goal and Louie was rightly named Bays Man of the Match for his half dozen quality saves that kept the score at what it ended up.

Next week it’s a trip over to South Auckland, to Manurewa, as 2nd plays 4th and hopefully Bays can keep the recent good momentum going.