MATCH REPORT: Round 16 vs Albany Utd 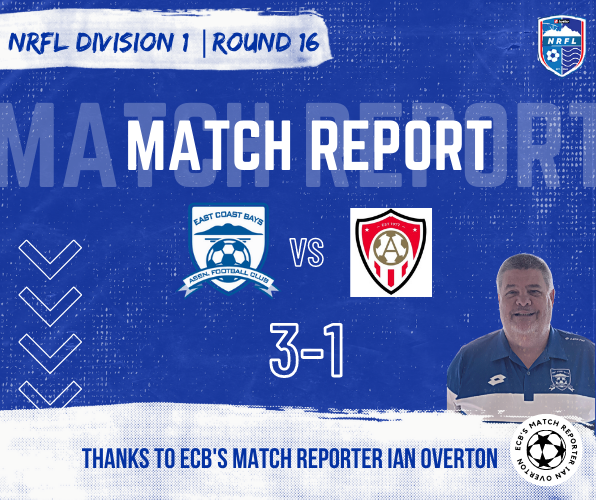 Well-deserved win over local rivals moves Bays up to 4th

Bays returned home to Bay City Park after a Bye week because of the Chatham Cup. More changes to the starting line up with Nick Gaze & Dan Morgan given their 1st team starting debuts and new signing from Albany, Thomson Nkoy on the bench.

Bays started brightly yet again with Nicolai & Liam given free reign to go at the Albany defence. After 4 minutes Nicolai made a break down the right, cut inside but the danger was cleared. A minute later a ball down the left found Keegan who’s cross into the middle found ace goal scorer Callum who shot straight at the keeper. A fantastic ball straight down the middle by Callum found Dan who had his shot blocked for a corner. Then Sam played a ball right across the face of goal that was just missed at the back post. Keegan then fed Nicolai who had his shot blocked. The rebound found Dan but he was flagged as offside.

In a frantic opening twenty minutes Bays created multiple chances to score. Nicolai then had a shot blocked by a couple of defenders. Liam then went on a run down the right but his shot was too close to the keeper. Bays had a lucky break in the 21st minute as a cross from the right by Roberts found D Mosquera. He managed to head the ball against the post and it rolled away to safety. Sam then put in another cross and Keegan had a shot blocked. Five minutes later Keegan made a burst right up the middle and his right footed shot was deflected out for a corner.

Just when we thought the breakthrough would not happen Nicolai made a break into the box in the 29th minute and hit a right foot shot across the keeper into the back of the net for 1-0 to Bays. Nick was having a great tussle in centre midfield and after the winning the ball he found Dan but his cross was not a good one. Sam then played in Keegan who had his shot saved. Albany had a rare attack in the 39th minute with McGuiness shooting straight at Louie. Just before half time Dan hit a right foot curler that was punched away by the Albany keeper. Keegan was then brought down by Tom Davis in what looked like a stone wall penalty but play was waved on. The half time whistle went & Bays deservedly led 1-0.

Albany made a change at half time replacing a forward with a defender with AJ O’Toole coming on for Bashir and Jack Beguely moving up front to lead the Albany forward line. Straight after half time Nicolai went on one of his mazy runs, cut inside the defence, and had his shot blocked yet again. Three minutes into the second half Bays doubled their lead when Liam crossed from the right. Keegan missed the ball in the centre but the ball carried on to the back post and was tucked home smartly by Sam for 2-0 to Bays. Nicolai then went straight down the middle before being fouled just outside the box. From the free kick Nicolai’s low shot was saved for a corner. Dan Morgan then had another shot straight at the keeper.

Bays made their first change in the 55th minute with Julyan replacing Daewook at the back. Keegan was then yellow carded for two quick fouls but can’t beat the enthusiasm he shows. O’Toole was then yellow carded for shirt pulling back on Keegan. Albany made a rare break forward and almost scored against the run of play when Beguely shot point blank at Louie who made a very sharp reaction save. J Allen was then booked for a foul on Nick. Liam then burst into the box but shot over the top. Albany then eventually made another substitution with Bartlett coming on for Allen but not before there was a lot of confusion on the sideline. A wrong shirt number was the problem with Albany already having a number 15 on the field so a change of number saved the day.

Five minutes later D Mosquera was replaced by T Mosquera. A minute later Bays were almost 3 up when Nicolai passed to Keegan. He shot past the keeper but it was saved on the line & cleared away. Two minutes later Bays made a double change with Dan & Nicolai being replaced by Thomson (for his Bays debut) & Josh Coe. Four minutes later Bays were three up. A ball was played forward and in trying to cut it out Davis deflected the ball backwards to Keegan. He smartly drew the next defender before passing to the far post for Josh to drive home his debut first team goal. Albany reacted straight away replacing McGuiness with F Smith in the 80th minute.

A minute later a ball was played into the Bays box. Neither Sam or Logan managed to clear the bouncing ball and Smith nipped in between them to smash a shot over Louie for 3-1. Albany upped the ante in almost scored again a minute later when Bartlett shot over the top. Three minutes later Beguely ran shoulder to shoulder with Logan who was deemed to have fouled him & was yellow carded. Bartlett’s left foot curler went over the wall but carried on wide of the post. With three minutes to go James came on for Sam. Josh then had a right footed shot just go wide of the right hand post. Then from a cross Nick did well to head the ball down into the path of Keegan who smashed the ball home but was ruled offside. Shame after such a great build up & finish. Bays still had enough time to create two more chances with Logan having a header saved with the keeper under pressure from Julyan. Then Keegan played in Nick who had his right footed shot saved.

Shortly after this the final whistle went and Bays had run out 3-1 winners. Great to see a number of the younger players getting a start and the many chances that were created during the game. A well-deserved three points and Bays were back up to 4th in the table. Next week it is another home game against Tauranga and a big farewell party for El Presidente Russell Fisher.